The 2018 Faversham Nautical festival on July 14 July 15 was another success for the Faversham Creek Trust and supporting organisations. It was also successful for Hollowshore Cruising Club, whose stand attracted a good number of visitors and some serious enquiries about joining, including one applicant who paid his subscription on the spot. A second joined later. 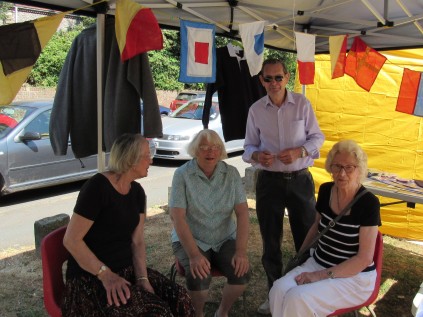 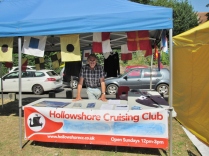 Thanks goes to those members who helped staff the stand, organised by Social Secretary Jack Woodford, who did all the advance work and setting up on the Saturday. Thanks also to Vivian Thompson and James Read, who brought along and rigged their recently-purchased Swallow Yachts’ Bay Raider 20, and a Drascombe Lugger, which created a lot of interest. The club stand was next to one run by fellow member and local boat-builder and repairer Alan Staley, and while another member, boatbuilder Alan Thorne helped with the launch of skiffs built by local schoolchildren.

Said Alan Thorne: “We were there all weekend with our stand next to the bridge. On Sunday afternoon the school children launched their two rowing skiffs which they had built under supervision of my son and myself in just five days during the week running up to the Nautical Festival.

“They made a great job of the skiffs with four children aged 11-14 per boat. After the launch they quickly learnt how to row and then had the best of three races. In a close contest the girls team won the final race when the boys ended up in the reeds! There are now four rowing skiffs which are being used to teach rowing each week during the Summer.”

Visitors saw a range of traditional working craft that had been invited to moor in the upper regions of the Creek over the weekend.

HCC: If the burgee is up, we’re open!